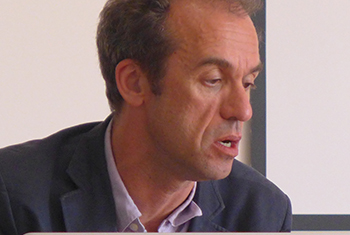 I am professor of English literature at the University of Paris-Sorbonne and an honorary senior research fellow of the Institut Universitaire de France. I am interested in the encounters of English literature when it meets other disciplines such as philosophy or the history of ideas, when it travels to other parts of the world such as India or the Middle East, when it is confronted to social practices such as sports. I work in particular on the hesitations and repositionings that such encounters provoke.

I am interested in studying philosophy in its own terms, having written monographs on Bacon and on Locke for instance, as well as understanding the philosophical dimension of literary texts.

I have read English literature’s encounters with the East, in particular in the works of Conrad and Kipling, whom I have edited, but I have frequently turned to Indian writing in English, from Rushdie to Ghosh.

I have developed an interest in the (sometimes ambiguous) celebrations of sports which literature offers and in the largely unstudied corpus of literary texts which represent and redefine tennis or running, football or cricket.

I work on the theory of fiction from a philosophical point of view, studying in particular the ways in which fictional texts provoke ambiguous responses in readers and hesitations in their attitudes towards texts.

Between 2011 and 2015 I was the principal investigator of an Agence Nationale de la Recherche-funded programme in the study of quarrels and disputes in Early Modern Europe. Within the programme I carried out mainly comparative research between France and England and edited or co-edited two edited volumes and two special issues of journals.

Between 2013 and 2015 I was the co-investigator of a Franco-Canadian research programme funded by the France Canada Research Fund, which has resulted in an edited collection forthcoming with the University of Toronto Press, which deals with the cultures of sport in the long eighteenth-century.

As part of my Institut Universitaire de France fellowship I organised and co-organised a number of events in the field of sports and literature, resulting in particular in a special issue of the International Journal of the History of Sport and in a number of publications in international journals.

Prior to joining the Sorbonne in 2008, I was director of the Maison Française d’Oxford, a French-funded research centre in the Humanities associated with the University of Oxford, where I coordinated a number of research projects and supervised resident doctoral students in the humanities.

I served as French cultural attaché in the French Embassy in Syria, some years before the disintegration of the country.